The common theme to all research in the Rayment laboratory is understanding how proteins function at the molecular level, which typically starts with the determination of a three-dimensional structure by X-ray crystallography. This interest is driven by the simple fact that although proteins may contain hundreds of amino acid residues, alteration of a single side chain or just a few atoms, may render a protein non-functional. Understanding how this can happen demands a detailed knowledge of the context of each amino acid, hence the need for a molecular structure. However, all of the current studies also include a wide range of kinetic, ultrastructural, biophysical, and biological approaches to gain a deeper understanding of function. Problems under investigation include the studies of motor proteins, microtubule-organizing centers, and proteins involved associated with the control of Fusarium Head Blight. Coiled-coils are a common feature of many of these projects. 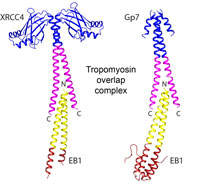 Coiled-coils
It is estimated that ~10% of all eukaryotic proteins contain regions of coiled-coil where these proteins are implicated in important cellular processes such as cell division, muscle contraction, and regulation of gene expression. Despite their diverse and critical biological functions, large coiled-coil containing proteins have traditionally been challenging to study because they are difficult to express in large quantities and because they often contain multiple domains with distinct functions. Over the past five years, the Rayment laboratory has developed new approaches to investigating the structure of proteins that contain coiled-coils. In particular, a suite of fusion proteins has been developed that dramatically improve the expression and solubility of this class of protein. This has facilitated structural determinations for kinesin, components of the yeast spindle pole body, tropomyosin, and sections of the myosin rod. 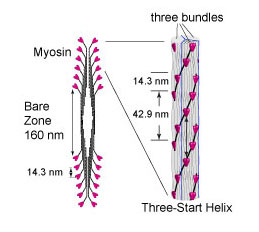 Myosin thick filament
My group has devoted considerable effort to understanding myosin, which is the major motor protein in muscle. After many years of studying the motor itself, the current focus is on the thick filament. This is formed by a highly conserved segment of skeletal, smooth, and cardiac myosin molecule that self assembles through an extended region of coiled-coil to form a bipolar filament. Ironically, even aftermore than sixty years of investigation, the molecular arrangement of myosin in the thick filament is still unclear in part because it has proved difficult to express sections of the myosin rod in a manner suitable for biophysical analysis. The immediate goal of this study is to determine the structures of an overlapping series of fragments that can be used to establish a molecular model for the thick filament. The long-term aim is to account for the cardiac and muscle myopathies that arise from mutations in the myosin rod. This project is a collaboration with Drs. Cui Qiang and Leslie Leinwand. 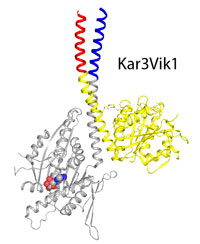 Kinesin-14
The kinesin superfamily of microtubule molecular motors exhibits the greatest diversity of any motor family. This allows them to participate in a wide array of cellular functions. Our group is currently focused on understanding the structure and function of Kar3 from Saccharomyces cerevisiae. Kar3 belongs to the Kinesin-14 family that generates minus-end directed force utilized in mitosis and meiosis. Kar3 forms a heterodimer witheither Vik1 or Cik1, where the latter contain a motor homology domain that retains microtubule binding properties but lacks a nucleotide binding site. This requires intermolecular communication between Kar3 and the non-motor domain (either Vik1 or Cik1) in order for the motor to move. The nature of this interaction is not well understood, but appears to control the biological function of these heterodimeric motors. The focus is to understand the molecular basis of motility for this class of kinesin through a collaboration with Susan Gilbert and Andy Hoenger, which brings together detailed kinetics and ultrastructural analyses to tackle a compelling question in motor biology. 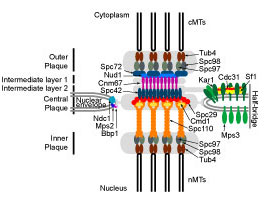 Spindle Pole Body
In recent years, we have initiated a new project to determine the  olecular framework of the microtubule-organizing center in the budding yeast Saccharomyces cerevisiae also known as the spindle pole body (SPB). Microtubule organizing centers play essential roles in chromosomesegregation, cytokinesis, fertilization, cell motility, and intracellular trafficking. Given their critical role in cell division, it is not surprising that defects in assembly and function have important implications in disease, particularly in cancer and birth defects. The yeast SPB is a massive macromolecular assembly that is about 1100 Å in diameter and about 1600 Å high where the core is built from ten components. Most of these proteins contain extended sections of coiled-coils and were not tenable problems until the development of new fusion proteins developed by the Rayment Lab. The current goal is to determine the structure of each component and use these to develop a three-dimensional model for the entire assembly in conjunction with electron microscopy, solution scattering, force measurements and computational modeling. This is part of a collaborative effort with Mark Winey, Trisha Davis, David Agard, Chip Asbury, and Andrej Sali.

Fusarium Head Blight
Fusarium Head Blight is a plant disease with serious economic and healthconsequences. Indeed, it is estimated that between 1998 and 2000 the crop losses exceeded $2.9 billion dollars. The disease is caused by several species of the fungus Fusarium that reduce grain yields and contaminate the grains with trichothecene mycotoxins such as deoxynivalenol, nivalenol, and T-2 toxin. Although considerable effort has been devoted to overcoming this agricultural problem, at present there is no satisfactory way of combating these pathogens or their associated toxins. The goal of this research project is to create improved enzymes for inactivating the trichothecene mycotoxins through structural studies, coupled with protein engineering and directed evolution. This is an extension of a long-term interest in enzyme evolution. Photo credit to Brian Steffenson, University of Minnesota.

Collaborative interactions
The Rayment laboratory is highly collaborative which offers terrific opportunities for students and postdocs to receive an interdisciplinary training in biophysical approaches to important problems in biology. In addition to the collaborations noted above, there is an active collaboration with Jorge Escalante-Semerena (University of Georgia) to continue long term studies of enzymes involved in cobalamin biosynthesis and protein acetylation. 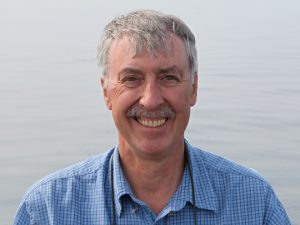