The major developmental change in the plant life cycle is the initiation of flowering. Many plant species have evolved the ability to regulate flowering in response to environmental variables such as changes in day-length or temperature. An example of a temperature response is that certain plants require relatively long periods of cold exposure during winter to initiate flowering the following spring. This acquisition of competence to flower after prolonged exposure to cold is known as vernalization. Before competence is achieved, plants must measure exposure to a sufficient number of days of cold to represent a complete winter; this ensures flowering only occurs when spring has arrived, rather than during a temporary warming in the middle of winter.

We are using a combination of genetics and biochemistry to better understand, at a molecular level, the process of vernalization. For example, we identified a gene (FLC) in the crucifer Arabidopsis thaliana that prevents flowering unless they have experienced the cold of winter. Exposure to cold promotes flowering via a stable epigenetic switch of FLC to a repressed state. This epigenetic state of FLC is reset to an active state in the next generation. We are also studying vernalization in the grass Brachypodium distachyon. Grasses have a vernalization system that evolved independently of that in Arabidopsis thaliana. In fact, the vernalization systems in different groups of plants all result from convergent evolution. This is not surprising because when flowering plants were diverging, the earth was much warmer and the landmasses were in different locations than at present. Only after many ecosystems became colder, would a vernalization response (and other cold responses such as cold-mediated release of bud dormancy) be adaptive.

We are also studying biomass traits in Brachypodium distachyon in an effort supported by the Great Lakes Bioenergy Research Center (www.glbrc.org/), and have several projects in the area of science education. 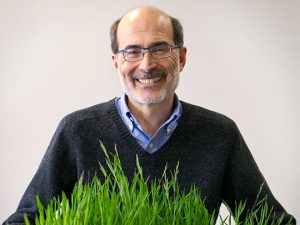