Obesity is currently a worldwide epidemic and public health burden that increases the risk for developing insulin resistance and several chronic conditions such as diabetes, cardiovascular diseases, inflammation and non-alcoholic fatty liver disease. The multifactorial causes of obesity include several genetic, dietary and lifestyle variables that together result in an imbalance between energy intake and energy expenditure. This surplus energy is primarily stored in the adipose tissue as fatty acids in the form of triglyceride-rich lipid droplets. However, the accumulation of excess cellular fatty acids, particularly saturated fatty acids, activate cellular stress and inflammation pathways that compromise many cellular functions including insulin signaling. 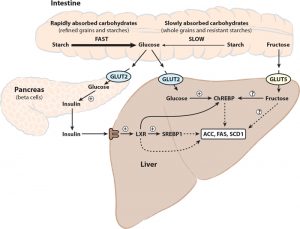 Both dietary and endogenously synthesized fatty acids contribute to the whole-body fatty acid pool. The process of de novo fatty acid synthesis utilizes several enzymes that convert the two-carbon acetyl-CoA into 16- and 18-carbon long chain saturated fatty acids (palmitate and stearate, respectively). Stearoyl-CoA desaturase (SCD) enzymes catalyze the conversion of palmitate and stearate into the monounsaturated fatty acids palmitoleate and oleate, respectively, which are the major fatty acids found in triglycerides. There are four SCD isoforms in mice and two have been characterized in humans. Our research aims to understand the cellular and physiological roles of the SCD genes in cellular differentiation and disease formation, and to elucidate the molecular mechanisms by which SCD modulates these processes. 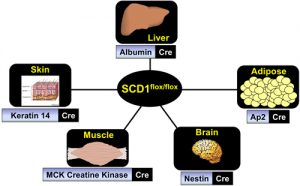 To address the physiological roles of the SCD genes in lipid metabolism, we have generated mice with a targeted disruption, or whole-body knockout, of the stearoyl-CoA desaturase (SCD) gene isoforms. Over the past several years, we have shown that SCD1-deficient mice are remarkably protected from obesity and insulin resistance. We are currently utilizing the Cre-lox system to create mice with a tissue-specific (liver, adipose, muscle, brain and skin) disruption of SCD1. Our goal is to use these mice to determine which tissues are most responsible for the phenotypes observed in whole-body SCD1-deficient mice. Our recent studies have shown that skin SCD1 deficiency elicits a hypermetabolic phenotype that protects mice from obesity and insulin resistance. We have also shown that liver SCD1 deficiency impairs carbohydrate-induced upregulation of hepatic lipogenesis and protects mice from carbohydrate-induced obesity, but fails to confer resistance to high-fat diet-induced obesity. The role for SCD1 in other tissues, as well as the role of the other SCD isoforms, is still under investigation.

sebocytes, which are the major lipid producing cells of the skin. Our objective is to determine the molecular events that define the  differentiation process in both adipocytes and sebocytes. 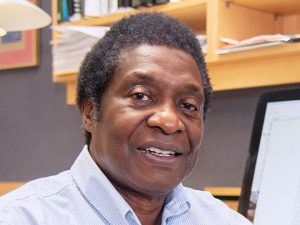