Arabidopsis plasma membrane signaling
Plants respond to environmental changes such as drought by a complex network of signaling proteins whose levels of protein phosphorylation are modulated throughout the cell. Our lab is using a mass spectrometric-based quantitative phosphoproteomic pipeline to identify the key components of these signaling networks initiated by hormones and osmosensing receptor proteins at the plant plasma membrane. Arabidopsis thaliana is the model organism under study since it provides facile genetic tests for hypotheses derived from the chemical analyses to ensure that the measured changes play important roles in planta.

In Arabidopsis and other plants, protein kinases represent the largest of all gene families present in the genome, pointing to a complexity in the phosphoproteome that remains poorly understood. The main goal of this project is to increase our understanding of receptor-like kinase mediated signaling. Untargeted ‘discovery’ measurements are performed through a pipeline of metabolic labeling of intact plants with 15N/14N and a high resolution Orbitrap-based tandem mass spectrometer followed by targeted measurements using chemically synthesized heavy isotope phosphopeptide standards and a triple quadrupole tandem mass spectrometer. Finally, reverse genetic experiments using Arabidopsis plants containing mutations in the phosphorylated amino acids provide final tests of the in planta functions for these posttranslational modifications. These experiments have the potential to reveal important new information on key members of hormone and drought signaling pathways in plants as well as provide a general technological platform and paradigm for similar studies by other researchers.

Molecular basis for the electrocyte
The electric eel (Electrophorous electricus) is a fresh water fish from South America, the only species within the genus Electrophorous. Reaching up to 6 feet in length, E. electricus is capable of generating both weak (millivolt, from Sach’s organ) and strong (in excess of 600 volts, from strong and Hunter’s organs) electric discharges generated within electrocytes, which encompass the majority of the tail of the fish.

Over 700 species of electric fish have been identified. The vast majority of these fish are capable of producing only weak electric discharges that are used for navigation and communication. Interestingly, electric organs have evolved at least seven times in independent lineages. The morphology of the electric organ varies from fish to fish, but they are all composed of electrocytes which share certain molecular characteristics between species.

Our lab is involved in a collaboration to investigate the genetic basis for electrocyte differentiation and function using genomic, transcriptomic and proteomic technologies, with the electric eel as our primary model. Identification of the genes and regulatory networks that guide electrocyte development has the potential to open up new avenues of applied research in medical and energy fields as well as to provide basic insight on this fascinating evolutionary development.

Blood-borne biomarkers for colorectal cancer
Colorectal cancer accounts for 10% of annual cancer diagnoses in the US and is the second leading cause of cancer deaths. Early detection of colorectal cancer is crucial to increase survival, but current detection methods are highly invasive or not sensitive enough to achieve early diagnosis. Consequently, the rate of people undergoing recommended colon cancer screening is low. The work done in this laboratory, in collaboration with William F. Dove’s oncology laboratory and colleagues at UW Hospital, uses quantitative proteomics to discover and validate serum protein markers of colorectal cancer for the eventual purpose of developing a minimally invasive biomarker screen.

There are three aims to this study: 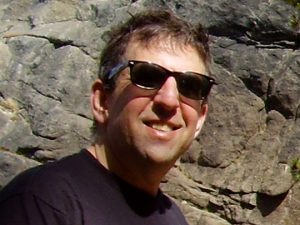