Mapping the Dynamic Proteome
Recent improvements in mass spectrometry have enabled deep profiling of post-translational modifications (PTMs), leading to the identification of hundreds of thousands of modification sites that regulate biology. A remaining challenge is to move beyond simply cataloging these modifications to assigning their biological functions. A critical step toward this goal is to understand the spatial localization and temporal dynamics of PTMs. Our lab uses protein engineering approaches to repurpose native enzymes as chemical biology tools for covalent capture of PTMs. Two important advantages of enzymatic catalysts are 1) they can be genetically targeted to specific locations within the cell, enabling spatial resolution of PTMs; and 2) they have typically evolved to function on fast timescales in the cellular milieu, enabling temporal resolution of PTMs. Our goal is to bridge the gap between proximity labeling approaches to studying the proteome, which provide spatial information, and proteome-wide approaches for identification of PTMs, which provide clues about protein function.

Spatially-resolved mapping of proteolysis via enzymatic N-terminal tagging
Proteolysis is a key post-translational modification that regulates a wide array of biological processes in human health and disease, including viral infection, cancer progression, organismal development, and neurodegeneration.  Over the past decade, technologies for the enrichment of the neo-N termini generated by proteolysis, as well as improvements in mass spectrometry, have enabled systems-level study of proteolytic cleavages. However, the challenge remains to move beyond simply cataloging these modifications to understanding their functional roles in biological regulation. We are developing and applying chemoenzymatic tools that will enable global analysis of proteolysis in defined subcellular locations.

New enzymatic tools for proximity-dependent capture of the phosphoproteome
Protein phosphorylation is a PTM that regulates a diverse array of biological processes, leading to emergent cellular behaviors such as proliferation, migration, and apoptosis. Based on its central importance in cell signaling, dysregulation of phosphorylation networks is highly implicated in disease, and kinases represent an important class of drug targets. Mass spectrometry (MS)-based proteomics has enabled significant advances in defining the human phosphoproteome with ever-increasing depth. However, a complete understanding of how phosphorylation orchestrates biological function requires spatial and temporal resolution that remains technically and analytically challenging to obtain. To enable spatial and temporal resolution of the phosphoproteome, we are developing enzymatic tools for covalent capture of phosphorylation marks. 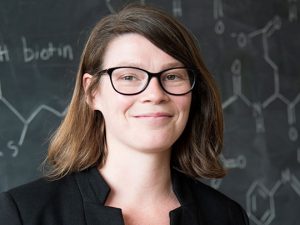