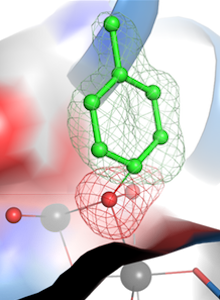 Sometimes, they consume a pollutant in the environment that humans want to get rid of, a process called bioremediation. Investigating the enzymes used by bacteria to carry out that process is important for scientists to understand and possibly improve on these powerful reactions. However, until now, having a snapshot of one of these important enzymes in action has eluded science.

In a publication in the journal Nature released March 27, scientists from the Department of Biochemistry and Department of Chemistry at the University of Wisconsin–Madison have solved the structure of an enzyme caught in the act of attacking toluene — a chemical derived from wood and oil. The work is important because it provides a glimpse of the mechanics of a process that could be harnessed to help clean up oil spills and create valuable new chemicals.

“In this research, we are trying to understand how nature uses iron atoms, electrons, and oxygen gas from the air to selectively oxidize chemicals,” says biochemistry Professor and Chair Brian Fox. “This reaction is the first step in a process where the carbon atoms in toluene, called an aromatic ring, are prepared for consumption by bacteria.”

Read more about this research in the press release below.