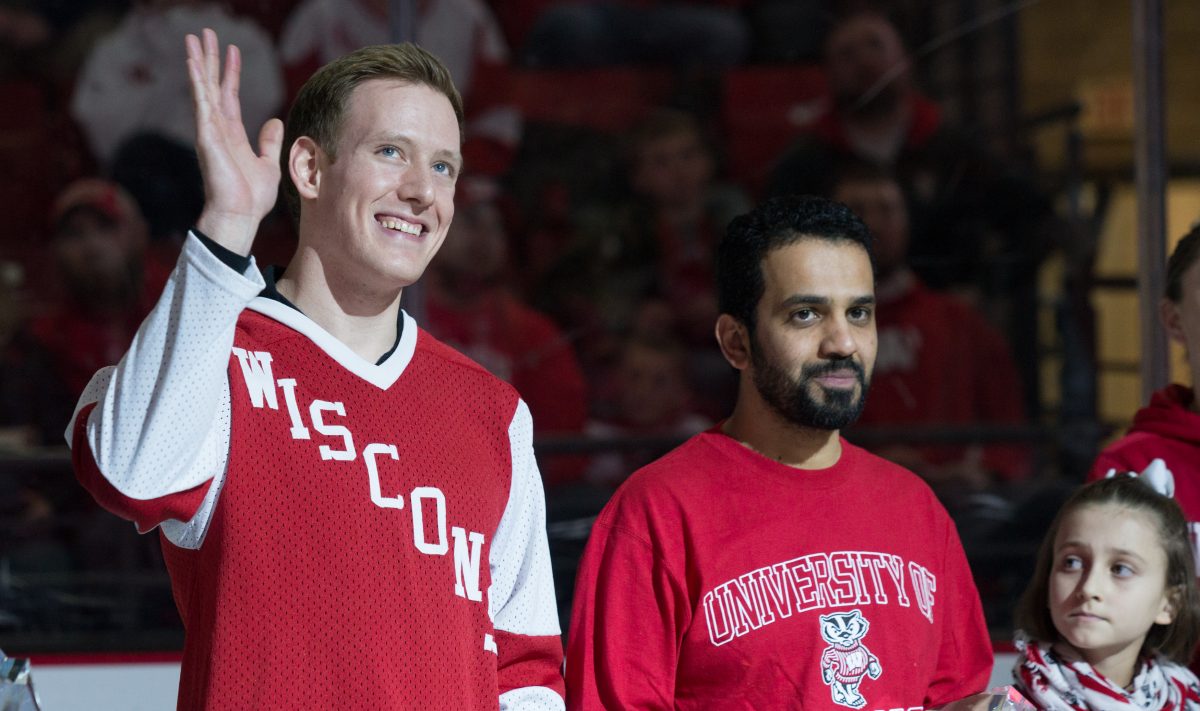 The awards were sponsored by The Ride, a fundraising event hosted by the Carbone Cancer Center. In its second year, it drew more than 1,250 bike riders to the roads of eastern Dane County in September of 2017 to raise money for cancer research. One hundred percent of the $352,000 raised went back to cancer research at the university in the form of 14 research awards. Awardees were invited onto the ice to be recognized.

“It was really exciting to win this award and get acknowledged at the hockey game,” says Klein, who has already signed up to participate in the next Ride in September 2018. “We spend a lot of time hunkered down in our labs but getting this award helps us step back and see that our work is novel and meaningful. It was great to have our work on cancer be recognized this way in front of an entire hockey stadium.”

Klein studies a particular protein that has been implicated in many forms of cancer. Research shows that in ovarian cancer cells, the protein is deficient but when it’s overexpressed in the cells, the protein can prevent cancer. His next step is seeing if he can find a synthetic molecule that can be used to mimic this overexpression and hence possibly help with preventing cancer. However, he says this work also provides an important understanding of the basic mechanisms and functions behind this protein and any synthetic compounds he studies.

“Mark’s research is focused on understanding how a tumor suppressor enzyme called SIRT6 can be activated by endogenous molecules and on developing a synthetic compound that could function similarly,” Denu says. “Mark has a unique skill of fostering collaborations with other researchers on this campus, including Professor Weiping Tang who is synthesizing potential compounds.”

Lewis studies how protein molecules that “spool” the DNA in cells can regulate cellular function and influence how cancer cells grow and respond to treatment. These protein molecules called histones keep the DNA wrapped up in an inaccessible ‘off’ state and releases it when certain genes are needed by the cell. Research shows that specific mutations to the histones are drivers of certain types of pediatric cancers in humans.

The Lewis Lab is trying to figure out how and why this happens. They’ve found that specific “oncohistone” mutations drive some pediatric cancers by transforming histone proteins into potent inhibitors of gene regulatory processes. Their work explores fundamental questions in biology but also clinically relevant ones.

“It was a great surprise and honor to be selected as a Ride Scholar,” says Lewis, who will also participate in the 2018 Ride. “You see the huge amount of work that goes into organizing events like this and the effort all the bikers put in. It’s so great to know their hard work is going directly to cancer research. It’s very humbling to have received an award.”