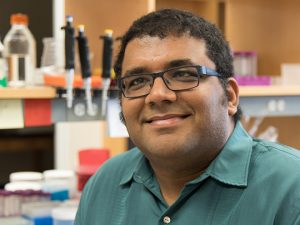 A major goal of the Great Lakes Bioenergy Research Center is to harness the power of microbes to create biofuels. But often, it’s an expensive challenge for scientists to identify the most useful individual variants among thousands of similar microbe strains. A new study led by Vatsan Raman, an assistant professor of biochemistry at the University of Wisconsin–Madison, unveils a biosensor that may light the way to the best microbial candidates for biofuel production.

In search of the best biofuel-producing microbes, scientists may need to make millions of variants via genetic modifications. But only a handful of these variants are likely to produce large amounts of biofuel. To identify the most promising strains, scientists currently have to crack open the cells and test for the desired molecules one microbe at a time, an expensive and extremely labor-intensive process.

In a paper published January 12, 2019, in ACS Synthetic Biology, Raman’s team describes a new biosensor capable of reporting a microbe’s biofuel production capacity to scientists from within the cell. It’s a faster, cheaper, and less disruptive means of identifying the most promising biofuel-producing microbes. The paper is co-authored by Yang Liu, a graduate student in Raman’s lab, and Robert Landick, UW–Madison professor of biochemistry and bacteriology. Liu is part of the Integrated Program in Biochemistry (IPiB).

To read more about this research, see the link below.