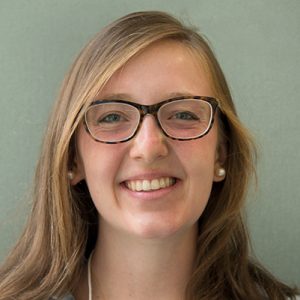 The pioneering transcription factor Zelda plays an essential role in reprogramming the genome of the early embryos of Drosophila (fruit flies). IPiB graduate student Elizabeth Larson, who is defending her Ph.D. research later this month, identified an important role for Zelda later in a fly’s development.

Larson, along with her colleagues in the Harrison Lab at UW–Madison and the Lee Lab at the University of Michigan, showed that in the larval brain Zelda promotes the undifferentiated cell fate in neural stem cells by binding to regions of the DNA genome that are distinct from those that it binds in the early embryo. In another project, she determined the mechanisms by which Zelda is regulated at the RNA level in the embryo and the developing brain.

“I am most excited by my finding that Zelda binds largely different regions of the genome in the larval brain than it does in the embryo. I also have preliminary data to suggest that Zelda is directed to these different regions by distinct domains within the protein,” Larson says.

Larson’s discoveries are not limited to fruit flies. Proteins with these characteristics drive changes in cell fate in all animals that the Harrison Lab and others have studied thus far. Larson’s research will help scientists understand more generally how cell fate is determined and how misregulation can lead to disease. Ongoing work in the Harrison Lab is also building on Larson’s work to understand how the essential transcription factor Zelda accesses the genome in different tissues.

After defending her Ph.D. research, Larson will begin working as an applications scientist at Promega. She adds that during her time in IPiB, she enjoyed being part of the Graduate Leadership & Development Committee. “Going out to dinner with [IPiB student] recruits and showing off Madison to them [as the GLDC Recruiting Chair] was a blast,” she says.

To learn more about Larson’s research, attend her Thesis Defense on Thursday, April 27 in Room 1211 of the DeLuca Biochemical Sciences Building.