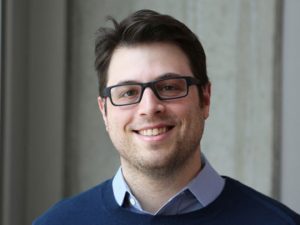 Biochemistry assistant professor Jason Cantor has received a 2021 Hartwell Individual Biomedical Research Award. His was among the ten award-winning proposals that represent early-stage, innovative and cutting-edge technology in medicine and biomedical engineering.

“In our 16th year supporting innovative, early-stage biomedical research with the potential to benefit children, the 2021 competition for Individual Biomedical Research Awards once again proved to be exceptional. Nominees who received an award leveraged internal support and guidance from their participating institution, as well as the experience of previous Hartwell Investigators,” says Fred Dombrose, president of The Hartwell Foundation.

Cantor’s three-year grant, “Establishing a Physiologic Platform to Uncover Genetic Dependencies in Blood Cancers,” awards $100,000 per year in support of his research that could identify promising new therapeutic targets with greater relevance to human disease. During the award period, he and his team will examine T-cell acute lymphoblastic leukemia (T-ALL), an aggressive blood cancer that accounts for 15% of all newly diagnosed ALL cases in the United States each year. Although survival rates for pediatric T-ALL have steadily improved, the intensive regimens typical for treatment cause chronic adverse effects in survivors and are ineffective for the nearly 20% of children that relapse.

“One of the basic questions that we ask in my lab is, ‘how do human cells facilitate their growth’, and by extension, ‘how do environmental factors influence this process’,” Cantor says. “To address this somewhat coupled set of questions, my group develops and uses new tools designed to more faithfully model environmental contributions to cell biology, and in turn, combine these with approaches that cut across areas of biology and engineering — CRISPR is a great example.”

CRISPR is a transformative DNA-editing technology that works like a pair of genetic “scissors” that can be used precisely turn off (“knockout”) any of the nearly 20,000 known human genes, making it possible for scientists to ask how specific knockouts influence cell traits like survival and vulnerability to drug treatment. CRISPR-based knockout screens further make it possible to test, in a single mixed population, how thousands of individual knockouts affect cell growth and thus offer a powerful approach to identify targetable vulnerabilities in human cancers. However, most CRISPR screens are performed in model systems with little relevance to growth conditions in the human body and offer only limited control of the cellular environment over time.

“I have a multidisciplinary background and so it’s exciting to pursue a high-risk project that borrows and integrates pieces from both my chemical engineering and basic biology training,” Cantor says.

In his Hartwell Foundation proposal, Cantor plans to test the hypothesis that CRISPR-based knockout screens of T-ALL cells growing in steady state conditions that better mimic those faced in circulation will reveal genetic dependencies that cannot be identified through similar screens done in existing model systems. If successful, this work has the potential to uncover new T-ALL therapeutic targets that would otherwise be masked by traditional approaches but that could have greater likelihood for successful translation in the clinic.

In addition, Cantor will partner with Dr. Christian Capitini, an associate professor of pediatrics in the School of Medicine and Public Health, to determine how lead genetic dependencies identified through CRISPR-based screens in this new platform affect the growth of human T-ALL xenografts (cells or tissues that are transplanted from one species to another) in mice. Both Cantor and Capitini are members of the Developmental Therapeutics Program within the UW Carbone Cancer Center. Through collaborations with Dr. Capitini and others, Cantor ultimately hopes to establish a pipeline for follow-up preclinical studies, the development of drugs that target proteins encoded by the newly identified CRISPR screen hits, and eventual transition to clinical tests.

“It is an absolute honor for me to join the outstanding community of scientists who are supported by the Hartwell Foundation,” Cantor says. “This award will have a significant impact on my program not only by supporting our short- and long-term research goals, but also by fostering new collaborative opportunities and my continued recruitment of highly passionate and creative trainees who have easily been the greatest part of starting a new lab.”