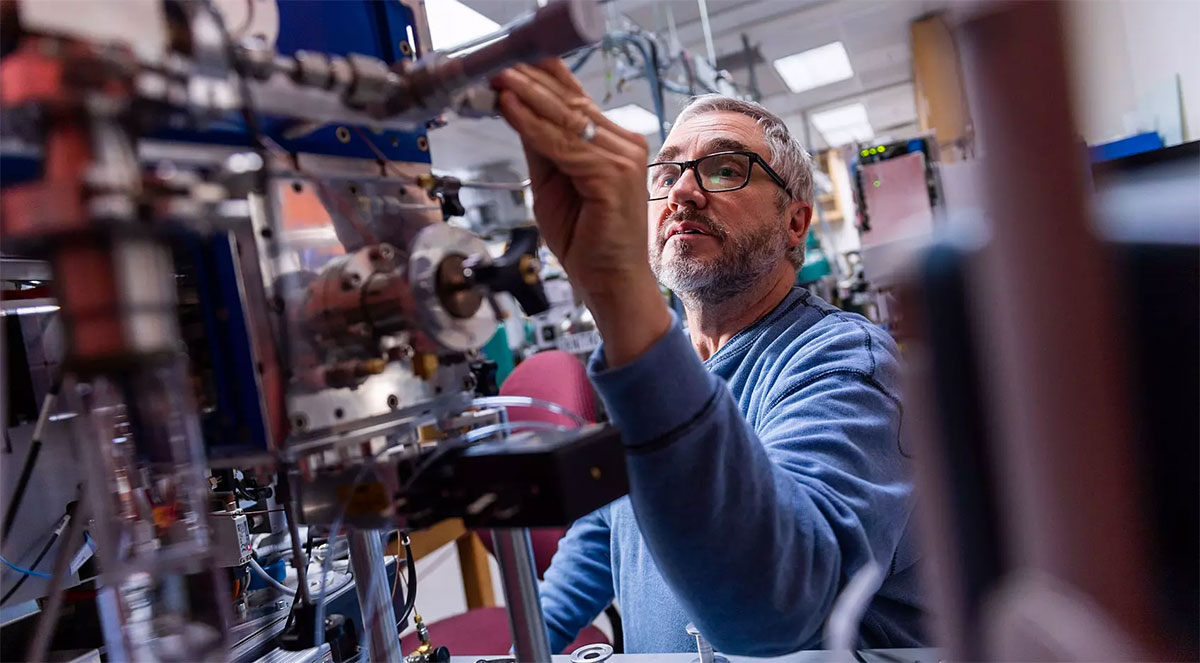 The Joshua Coon Lab has united the power of two major tools in biotechnology.

“This work is the culmination of a nearly five-year effort to couple mass spec technology to EM,” says Coon, a professor of biomolecular chemistry and the Thomas & Margaret Pyle Chair at the Morgridge Institute for Research.

In the paper, the team describes modifying an Orbitrap mass spec instrument to ‘aim’  single-particle protein complexes onto a chemical matrix directly from the ion beam of the mass spec.

Importantly, the novel technology provides the first evidence that the 3D structure of proteins is retained while undergoing mass spec analysis and that atomic structures maintain their original shapes outside of the natural environment. This finding provides a huge step in confidence that researchers across all fields of biology can have in their experimental findings.

“Josh’s lab is doing things no one thought could be done,” says Brad Schwartz, Morgridge CEO. “They love making better technology and it’s all aimed at helping other scientists do their job better. The Morgridge Institute invests in scientists like Josh and his team because he’s doing what no one else has done before.”

Mass spec has become one of the must-have tools of modern biology — the technology can determine the precise chemical identity of a substance, measure the molecular mass of compounds in a sample, and quantify their abundance.

The Coon Lab specializes in mass spec, and specifically in developing instruments and technologies to help scientists address fundamental questions in biology. That led the team, spearheaded by Mike Westphall, a distinguished instrument innovator, on a path to unite the potential of mass spec, with the power of electron microscopy.

Electron microscopy is a transformative technology for biologists because it illuminates the smallest pieces of living organisms. And in the case of cyro-electron microscopy, it reveals the atomic structure of proteins. These microscopes help unveil the smallest structures of cells which is one of the first steps to understanding the impact of diseases and disorders on human health.

The Coon Lab’s novel technology, which began development more than five years ago, now has the power to impact both the mass spec and EM fields.

“This was kind of the first time this has ever been done in the world of mass spec,” Westphall says. “Throughout the years, people have attempted to get stuff onto an EM grid or onto another surface, and they were able to get an image of one or two particles, but never enough to actually start looking at the fully assembled molecular structure itself.”

Kickstarted by Westphall, the team now includes a small group of trainees who are authors on the paper, including Kenny Lee, a postdoctoral research associate; Austin Salome, a graduate student; and Jean Lodge, an alumna of the Coon Lab and now a scientist at Eli Lilly.

In one exciting research direction, they hope to increase the resolution, sensitivity, scope, and throughput of cryo-EM protein imaging. This may also have an impact on electron microscopy sample preparation in a wide variety of applications.

“That was one thing that really grabbed my attention,” says Lee, who joined the Coon Lab after finishing his Ph.D. at Purdue University. “I saw the work as very unique, a thing you can only do in one place. It seemed like the Coon Lab was doing the one thing that nobody else could really ever do.”

Throughout the technology’s many iterations, the team had to overcome a major challenge: they were landing particles onto the grid, but the images in the electron microscope were a distorted mess.

“In the beginning, we were trying so many different things to understand why it wasn’t working. When you get nothing, it’s really hard to narrow down what’s happening,” recalls Lee. “I don’t know what I was thinking, but at some point, I thought we had to yield something.”

Glycerol, it turns out, is what helped the Coon Lab get something on the microscope.

Glycerol is often used in the food industry and food sciences as a preservative, says Westphall. It’s not entirely clear how glycerol works in this context — it either forms a cocoon that keeps the molecules in place for imaging, or it may replace the water somehow.

And so the group started to coat molecules in glycerol. They further capitalized on the collaborative environment at the Morgridge Institute to seek the expertise and advice of Tim Grant, an assistant professor of biochemistry and Morgridge investigator in virology who specializes in electron microscopy and is an author on the paper.

“I was immediately excited by the potential of this technology to revolutionize the way cryo-EM samples are made and to solve a number of the limitations cryo-EM currently has,” Grant says. “This paper represents an excellent step towards the creation of cryo-EM samples that will lead to better resolutions and the ability to solve structures which cannot be solved with the current techniques.”

With Grant’s help; and many iterations with landing particles coated in glycerol; the team imaged a fully assembled molecular structure in the microscope, a first in the field of mass spec and EM — with the potential to impact cryo-EM. “It shows that mass spectrometry can be used as a structural analysis technique to complement other big structural analysis techniques like microscopy, crystallography, and so on,” says Lee.

This story was written by Megan Costello and originally appeared on the Morgridge Institute for Research website.