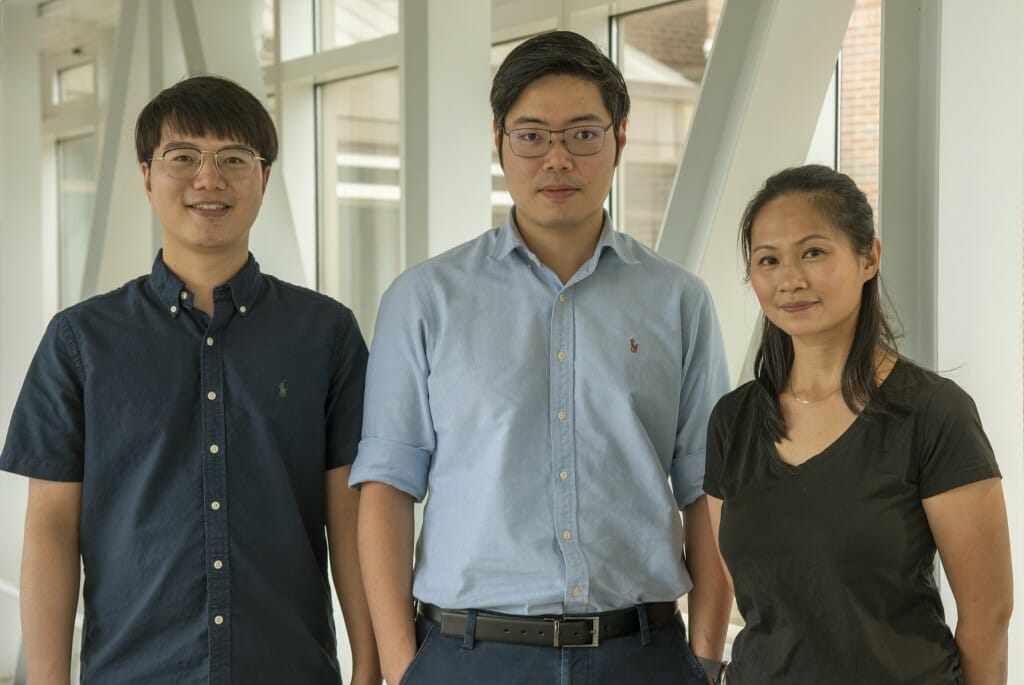 Researchers at the University of Wisconsin–Madison have described the way an enzyme and proteins interact to maintain the protective caps, called telomeres, at the end of chromosomes, a new insight into how a human cell preserves the integrity of its DNA through repeated cell division.

DNA replication is essential for perpetuating life as we know it, but many of the complexities of the process — how myriad biomolecules get where they need to go and interact over a series of intricately orchestrated steps — remain mysterious.

“The mechanisms behind how this enzyme, called Polα-primase, works have been elusive for decades,” says Ci Ji Lim, an assistant professor of biochemistry and principal investigator on new research into DNA replication published recently in Nature. “Our study provides a big breakthrough in understanding DNA synthesis at the ends of chromosomes, and it generates new hypotheses about how Polα-primase — a central cog in the DNA replication machine — operates.”

Every time a cell divides, the telomeres at the end of the long DNA molecule that makes up a single chromosome shorten slightly. Telomeres protect chromosomes like an aglet protects the end of a shoelace. Eventually, the telomeres are so short that vital genetic code on a chromosome is exposed and the cell, unable to function normally, enters a zombie state. Part of a cell’s routine maintenance includes preventing excessive shortening by replenishing this DNA using Polα-primase.

At the telomere construction site, Polα-primase first builds a short nucleic acid primer (called RNA) and then extends this primer with DNA (then called RNA-DNA primer). Scientists thought Polα-primase would need to alter its shape when it switches from RNA to DNA molecule synthesis. Lim’s lab found that Polα-primase makes the RNA-DNA primer at telomeres using a rigid scaffold with the help of another cog in the telomere replication machine, an accessory protein called CST. CST acts like a stop-and-go sign that halts the activity of other enzymes and brings Polα-primase to the construction site.

“Before this study, we had to imagine how Polα-primase works to complete telomere replication at the ends of chromosomes,” says Lim. “Now, we have high-resolution structures of Polα-primase bound to an accessory protein complex called CST. We found that after CST binds to the template DNA strand at the telomere, it facilitates the action of Polα-primase. In doing so, CST sets the stage for Polα-primase to first synthesize RNA and then DNA using a unified architectural platform.”

The researchers also got a glimpse into how Polα-primase might initiate DNA synthesis elsewhere along the length of a chromosome. Other scientists have also found the CST–pol-α-primase complex at sites where DNA damage is being repaired and where DNA replication has stalled.

“Because Polα-primase plays a central and very important role in DNA replication in telomeres and elsewhere along chromosomes — it’s the only enzyme that makes primers on DNA templates from scratch for DNA replication — our CST–Polα-primase structure provides new insights into how Polα-primase can also do its job during genomic DNA replication,” Lim says. “It’s a very elegant solution that nature has evolved to accomplish this complicated process.”

“Our findings reveal an unprecedented role that CST plays in facilitating this Polα-primase activity,” explains first author Qixiang He, a graduate student in the UW–Madison biophysics graduate program. “It will be interesting to see if accessory factors involved in DNA replication elsewhere on chromosomes set up Polα-primase the same way as CST does for telomeres.”

The researchers built the structural model of CST–Polα-primase using an advanced imaging technique called cryo-electron microscopy single-particle analysis. In cryo-EM, rapidly frozen samples are suspended in a thin film of ice, then imaged with a transmission electron microscope, resulting high-resolution, 3D models of biomolecules like the enzymes at work in DNA replication.

Lim’s team used cryo-EM single particle analysis to first determine the structure of CST–Polα-primase and then home in on visualizing moving parts of the complex in greater detail. They collected data at the UW–Madison Cryo-Electron Microscopy Research Center (CEMRC), housed in the UW–Madison Department of Biochemistry, and the NCI-funded National Cryo-Electron Microscopy Facility at the Frederick National Laboratory for Cancer Research.

“We started with a conundrum from our biochemical assay, but once we imaged the CST–pol-α-primase co-complex and saw its cryo-EM structures, everything immediately became clear. This was extremely satisfying for everyone on the team. Beyond that, the structures also provide ideas that we can now design experiments to test,” says Xiuhua Lin, lab manager and co-author of the new study.

“You can’t really study how a car moves by looking at its individual parts — you have to assemble the parts and observe how they work together. But biomolecular machinery often has so many moving parts that it can be difficult to study,” Lim says. “That’s where the power and versatility of cryo-electron microscopy single-particle analysis come in. This approach allowed us to put together a high-resolution atomic model and provided critical insights into how it moves, which in turn facilitated our understanding of how the human CST–Polα-primase works.”

The research was supported by a grant from the National Institutes of Health (R00GM131023). This news release, written by Catherine Steffel, Ph.D., (communications@biochem.wisc.edu), was originally published on the UW News website. Photo, from left: Qixiang He, Ci Ji Lim, Xiuhua Lin.