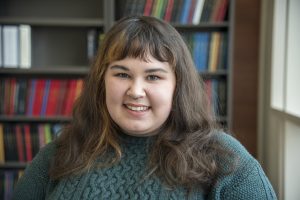 Aryel Clarke’s Ph.D. research focuses on a group of proteins that help maintain and remodel cellular membranes. Clarke, an IPiB graduate student in biomolecular chemistry professor Jon Audhya’s lab, says that part of what drew her to membrane remodeling was how little we know about this critical cellular function.

“That we know so much about basic cell biology without fully understanding fundamental aspects of how cellular membranes are remodeled and maintained is one of the main ideas that initially drew me into the Audhya lab and the world of ESCRT biology,” Clarke says. “I find ESCRT proteins interesting because they perform basic tasks for a cell but are generally not discussed in either undergraduate or graduate courses.”

The Endosomal Sorting Complex Required for Transport (ESCRT) machinery are found across many species of organisms, including mammals and other vertebrates, plants, fungi, and unicellular organisms. They help to seal the nuclear envelope after genome duplication, transport membrane proteins to lysosomes (a cell’s “recycling centers”), promote membrane severing when necessary, and more.

The ESCRT proteins act in a series — each protein is responsible for its own set of functions that must occur before the next protein can act — to build membrane-bound vesicles found within cellular compartments. Clarke asked how components of the ESCRT machinery are targeted to membranes at the appropriate time, specifically exploring how ESCRT proteins are regulated by another protein, LGD-1, that is involved in directing ESCRT proteins to correct locations within a cell. She developed a model of LGD-1 regulation, demonstrated how loss of LGD-1 affects ESCRT function at the endosome, and discovered that LGD-1 can physically interact with subunits of the ESCRT-III complex. She also found that LGD-1 can bind to membranes directly.

Clarke says this body of work is the first to study LGD-1’s role in ESCRT function using the C. elegans model, adding that LGD-1 may also play a role in other ESCRT-mediated membrane remodeling events, such as those occurring at the nuclear membrane.

“This study is part of a growing foundation of knowledge on how Lgd/CC2D1 proteins function to regulate ESCRT assembly at cellular membranes. Overall, cellular membrane maintenance and remodeling is a fundamental aspect of cell biology, and my work adds to our understanding of how that process occurs,” Clarke says.

During Clarke’s time in IPiB, she received several prestigious awards, including an NSF Graduate Research Fellowship and a 2022 Denton Award for Graduate Student Excellence in Teaching and Mentoring.

“As a former low-income student and the first in my family to earn bachelor’s and doctoral degrees, I have seen firsthand the need for strong science education and critical thinking,” Clarke says. “I would not be writing this dissertation without support from programs throughout my education at helping disadvantaged students succeed — from the Early College program in high school, to the McNair Scholars program during my undergraduate years, and finally the National Institutes of Health and National Science Foundation training grants that supported me while completing this work.”

After defending her Ph.D. research, Clarke will start a year-long lecturer position at the University of Wisconsin-La Crosse. She’ll be teaching a biochemistry lecture course as well as biochemistry and general chemistry labs.

To learn more about Clarke’s research, attend her Ph.D. defense on Thursday, August 18 at 11:00 a.m. CT in Room 1211 of the DeLuca Biochemical Sciences Building.