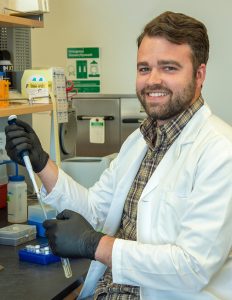 Scientists don’t fully understand how cells overcome the challenges they face while replicating the genome, the set of information that encodes instructions for biological functions. Aidan McKenzie, an IPiB graduate student in the Keck Lab, is particularly intrigued by “DNA replication restart” pathways that detail how bacterial cells restart DNA replication that’s been disrupted.

When a cell processes double-strand breaks and repairs them incorrectly, mutations and even chromosomal rearrangements can occur resulting in cell death or cancer. McKenzie monitored double-strand break formation in living cells with fluorescence microscopy experiments and determined the links between replication restart and other cellular processes by identifying several genes that are conditionally essential or important in E. coli strains with inactivated replication restart pathways.

Why E. coli? DNA replication in E. coli fails at least once per cell cycle when cellular machinery prematurely dissociates from the genome, and as a result, bacteria have evolved DNA replication restart mechanisms. Work with E. coli may assist our fight against antibiotic resistance and identify targets for new antibiotic compounds, McKenzie says, and results can inform our understanding of genome maintenance mechanisms used by other organisms.

McKenzie’s research also presents an important snapshot of DNA replication restart at a molecular level — a cryo-electron microscopy (cryo-EM) structure of a replication restart protein bound to the replicative helicase/loader complex. This structure describes for the first time how a single protein can bind and prime a replicative helicase for reloading onto an abandoned replication fork, McKenzie says. Cryo-EM is used to image biomolecules and complexes at high resolutions. Cryo-EM experiments for this research were performed in collaboration with biochemistry assistant professor Tim Grant’s lab and using materials and resources at the UW–Madison Cryo-Electron Microscopy Research Center.

Of his time in IPiB, McKenzie recalls mentorship opportunities in the Keck Lab among the highlights.

“I have had the pleasure of mentoring several students in the Keck Lab throughout my tenure, but the most impactful would be during my work in SMART [Students Modeling A Research Topic] teams while leading groups of local high schoolers,” McKenzie says. “Over the course of a year, we covered topics ranging from the basic chemistry of water to biochemical principles dictating protein folding and function…It was incredible to witness how quickly those students grasped topics that were alien to me until the latter years of my undergraduate studies, and I’ll always look fondly back on those memories.”

McKenzie received a National Science Foundation Graduate Research Fellowship in 2018. He currently has a manuscript under review at PLOS Genetics that is also available on bioRxiv. After defending his Ph.D. research, he plans to join a biotechnology company in the Madison area as a scientist.

To learn more about McKenzie’s research, attend his Ph.D. defense on Monday, August 29 at 11:30 a.m. CT in Room 1211 of the DeLuca Biochemical Sciences Building.