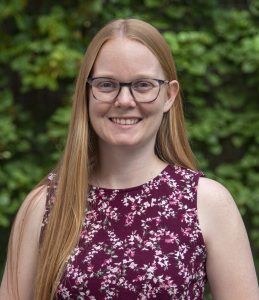 Antibiotic resistance is one of the great public health problems of our time. Since Peyton Spreacker joined IPiB as a member of the Henzler-Wildman Lab, she has been studying the role multidrug efflux proteins play in this phenomenon.

“We know that these proteins can take drugs out of bacterial cells, making them less effective,” says Spreacker. “However, there is emerging evidence suggesting that these efflux pumps could be used to import drugs into cells, reversing their traditional roles as resistance transporters.”

The model multidrug resistance transporter EmrE, for example, confers antibiotic resistance by pumping drugs out of a cell. Made of just eight main parts called helices, EmrE rocks back and forth, connecting at one end to close and moving apart to open at the other end. The Henzler-Wildman Lab discovered in 2017, however, that drug movement in EmrE isn’t as strictly coupled as researchers thought — in fact, it can actually move molecules both into and out of a cell.

Spreacker found a substrate that unlocks EmrE and makes E. coli cells more susceptible to successful treatment with antibiotics. She says that similar results have been observed in other transport proteins and collectively could help unlock new methods for importing drugs and designing more effective antibiotic treatments.

“This work is the first instance of EmrE and other multidrug transporters altering their function in cells simply due to the substrate added to the assay,” Spreacker says. “If we can find drugs that can be imported by these transporters or cause existing antibiotics to be effective in resistant strains of bacteria, then we have a new method to combat the antibiotic resistance crisis ravaging healthcare systems across the planet.”

A preprint detailing some of Spreacker’s findings is available on bioRxiv.

After defending her Ph.D. research, Spreacker will be joining LabCorp as a study director. In IPiB, she was a Graduate Leadership & Development Committee (previously known as Student Faculty Liaison Committee) Career Chair.

To learn more about Spreacker’s research, attend her Ph.D. defense on Friday, November 11 at 2:00 p.m. CT in Room 1211 of the DeLuca Biochemical Sciences Building.