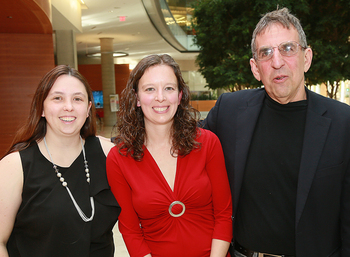 Scientists at the University of Wisconsin–Madison have identified blood-based fingerprints – human protein markers – associated with the pre-cancerous forms of colon cancer that are most likely to develop into disease. They say their findings are a promising start to what could ultimately lead to a new blood test for the cancer.

The lab of biochemistry professor Michael R. Sussman, in collaboration with researchers at the McArdle Laboratory for Cancer Research and UW–Madison School of Medicine and Public Health, used a technique called mass spectroscopy to isolate biomarkers in mouse and rat models of the disease and then test patient blood for the same markers. The researchers presented their newest advancements in the spring of 2019 in a study published in the Proceedings of the National Academy of Sciences.

“The most commonly used technologies such as colonoscopy are highly invasive or utilize stool samples for testing, which may not be appealing to patients,” Sussman says. “Because colon cancer is highly curable if detected early enough, setting up tests for the earliest signs of colon cancer to provide as many early diagnostic options as possible is critical. That is the logic behind what we were trying to do.”

Since nearly all cases of colon cancer are curable if caught early enough, this should make screening tests straightforward. However, this is not the case because colon cancer screening suffers from a paradoxical combination of low compliance rates and what is called ‘over-screening’ with colonoscopies.

While the gold standard for colon cancer screening is a colonoscopy, patients must complete a day-long prep to empty their bowels before undergoing an invasive procedure – factors that contribute to low screening compliance. On the other hand, research from UW–Madison shows many of the polyps found and biopsied during a colonoscopy are regressing or static and not at risk of being harmful. A blood test that can detect if a polyp is growing or cancerous would give a better indication that a colonoscopy is needed.

“It would not be meant to replace a colonoscopy in any way,” says Melanie Ivancic, the study’s lead author who started in the Sussman Lab as a graduate student and was then a postdoc. “But the blood test could serve as a pre-screen to detect polyps that have the greatest propensity to turn into cancer.”

Read more about this work at the link below.